My first year working for Burlington Northern just happened to coincide with the final 8 months of operations of their Alco locomotive fleet.     Being around the smokey, chortling, four-cycle engined, beasts day and night had me hooked from then on.  Once you've heard a single C-636 start a heavy transfer drag on a cold, clear night....you'll never be satisfied with the products of EMD.

Around late 1980, I moved into a rental house with a 2 car garage that immediately became the home of my new model railroad.  I eventually decided to free-lance this one,  a bridge road in the Pacific Northwest, connecting Western Washington with South Central Oregon.  In the manner of the yet to be created Montana Rail Link, The Cascade Railway would operate it's own freight trains and locals, but would also host long distance trains of the Burlington Northern.

The modeled Cascade was an E shaped point to point railroad representing 1 subdivision of the ficticious  system.  Home road power was an assortment of mostly 4 axle Alco roadswitchers with a couple of end cab switch engines for yard duties.  There were 2 paint schemes used,  a slightly simplified version of the Canadian Pacific gray & maroon represented the original scheme and the modern paint  a bright red and black  ( a la Washington Central).  The modern logo represented a volcanic mountain in front of a full moon (actually a CP Rail loco on its' side)

The Cascade wasn't a portable railroad, but it was built strong enough to make a move across town in 1989,  when the home I had built was completed.  I had a 3 car garage built with only a single car garage door...so 1 stall for the vehicle and, after the railroad was hauled over on a trailer and moved in,  a 24' x 24' walled off room for the Cascade system.

The railroad was completed to a stage where operating sessions were held every month or two, using up to 6 operators.  It reached a point where scenery was just getting started...and the management decided to go out and sample locomotives from EMD:

Finally in late 1997,  I decided I needed to upgrade the railroad room by adding carpet.  Sooooo, being a normal modeler...I chose to tear down the entire railroad to make it easier....and to come up with "something even better!"  Alas, it never happened.   After 20 years in the rain of Washington , and the depressing prospect of spending another 20 as an engineer on the same piece of track in the rain...the opportunity came up for Emily (wife & also a BN/BNSF employee) and I to make  career changes....and a move to Texas of all places!

Like most people my age, I was initiated into model trains when I received a Lionel trainset for Christmas when I was about 5 years old.  It came as an oval of track mounted on a green painted plywood board that would slide under the bed.  Pulled by a steam engine, I eventually had a bunch of the "cool" freight cars like the giraffe car, and the car that launched a helicopter.

My first piece of HO equipment was an Athearn 40 ft. flat car with with the small jib crane.  I didn't even own track at the time, but I thought it was pretty neat, and if I remember correctly, cost around $1.95 worth of saved up allowance.

Through my teen years I had a layout of sorts in our garage and/or enclosed porch, but had no real modeling focus until my first visit to the Pacific Northwest in 1974.  A family trip to the World's Fair in Spokane Washington brought my first exposure to the Burlington Northern.  I had read about it in magazines since it was created in 1970, but seeing the "Glacier" green and black freshly painted on everything, plus a healthy assortment of pre-merger colors on everything from switch engines to F-units to Alcos, was enough to hook me.

My modeling was pretty well stagnant for the last year of High School and year and 1/2 of Junior College.   It finally blossomed again in late 1978 when I moved to San Diego to attend college.  When I arrived I found a LARGE Model Railroad club that was on display every weekend in Balboa Park and joined up.  My brother David was attending college in Denver at the time, and frequent visits were spent photographing the BN and its' unit coal trains running south on the Joint Line towards Texas.

I decided BN in general and a BN unit coal train would be my weekly displays at the club operating sessions.   It was GREAT!...because no one in San Diego had a clue about the BN, so I was pretty much free of the rivet counters criticizing my modeling.

I continued collecting BN & pre merger BN equipment for the next couple of years.  After 2 years in the club, we were going to have to tear down the layout (which was over 20 years old) and were starting the planning process to move to a newer, bigger location within the park.  At this time my current distaste for clubs was formed...politics and cronyism started replacing common sense.  Luckily for me, a major change in my life was soon to come.

For several years I had been corresponding with all the major (and many of the non-major) railroads in the US trying to get a job.   At the end of July 1979, I made a follow-up call to the BN in Portland, Oregon.  The personnel manager said he might have something for me...if I could get up there.  48 hours later I was in his office and by the next evening....I started my career with BN, not so glamorous as I expected....my first night was spent sweeping floors and cleaning toilets in the division office building in Portland.....but it was a start.

I worked for the next 2 weeks, living in a motel, before I got time off to race back to San Diego to pack my belongings and head back north to start a 20 year residence in Washington.  The models shown here are still with me to this day...don't know that anyone would want this old Athearn junk now.  But they were seed for my next modeling chapter....The Cascade Railway
Posted by Lance at 05:45 5 comments:

My profile photo is pretty small, so here's a larger version....taken by well known Australian railway photographer Graham Cotterall of me behind the controls of Southern Shorthaul Railway locomotive GM-22 on the coal branch north of Wallerawang NSW. My 20 years of running locomotives came right back to me.....but the controls were on the wrong side!! 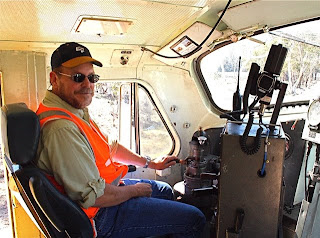 Hello all,
Decided I would give this blogging thing a try. I really enjoy keeping up with everyone else's progress and news, so I hope this will be a good way to keep in touch my friends in Australia (and those here in the old US of A).
Once I get it figured out, I'll try to use it to chronicle my currently under construction model railroad...but other things are likely to show up including travels, photos, and items from my other interests.
Stay tuned....
Posted by Lance at 04:27 No comments: