Here are the other 2 plans I've come up with...both OK, but not great in their own ways.
Once again, the plans are not to exact scale....the squares are 1 foot and the mainline curve radius is nominally 30"


Dubbo seems to be an interesting place....haven't been yet, but it's on the list for February.  I know it is now a shell of it's former self in terms of importance in the NSW rail operations.  Blair had been suggesting it for a model RR for some time, and co-worker, and fellow modeler Matt Sugerman came up with the basic design of this plan after spending some time with track diagrams and Google Earth.

In order to get as much space as possible for the yard at Dubbo, this is the only layout plan that is not a walk-in....there is a duckunder at the west end of the yard.  In spite of the space given, by the time the yard tracks and ladders are laid out, I don't believe the yard will be big enough to really be operationally useful. 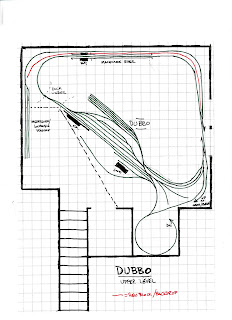 This plan is mostly yard oriented, with the lines from Merrygoen, Coonamble, Cobar and Parkes all represented by staging that will feed traffic into Dubbo.  The one line segment that is modeled on the lower level is a portion of the line to Orange, and it terminates in staging representing Orange/Sydney. 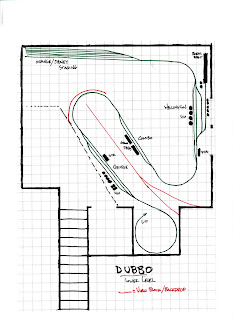 While I'm not that familiar with operations at Dubbo, I believe grain, fuel and ore traffic predominate with Pac National, Silverton and Patrick (& LVRC?). But a yard with a road crossing through it that has gates that swing across the tracks....kinda cool!

I would need to sell off my coal equipment, and stock up on 48's....And probably have to drop 800+ bills for an Auscision XPT.

...or back date to the time when Dubbo was a happening place.


When the plans for the new house were finalized and I saw the size and shape of the new layout room,  my mind went to work on how I could scale down my dismantled Muswellbrook to Werris Creek railway.  I decided that the most interesting part of the line to me was Ardglen Bank itself, and with a little thought, found that it seems to fit rather nicely in my new space.

The major downside to this plan is that, with the exception of the Silo at Willow Tree, and the ballast pit at Ardglen, this railroad would just be running trains back and forth, and thus, would probably get boring  rather quickly.

This plan would require less turns on the helix, because a good bit of the climb would be modeled, but trying to operate the bankers on the helix would present another problem. 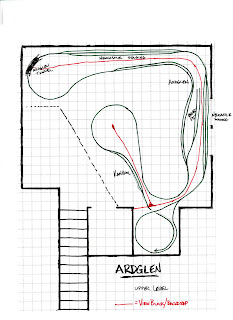 Since the helix would be shorter, I included turn-back loops stacked with the helix on both the Newcastle and Werris Creek staging areas 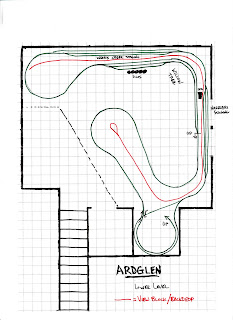 Since the same operators/trains that go to Gunnedah, come thru Ardglen...the same equipment would be needed for this as the Gunnedah plan...and I have a good portion of that already.
The least interesting of them all.   And one that would require mountain building....yuck!
Well,  that's all I've come up with....I did download the signal diagrams for the Sydney Metro Goods line...thought about coming up with something really off the wall....but haven't yet.   Hopefully I can settle on something and get started soon.
Posted by Lance at 00:03