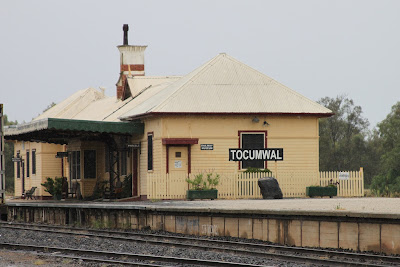 One month back from our rain soaked 3 week visit to Australia...and it doesn't even feel like we went.  I made MANY new friends and reconnected with old friends....and I already can't wait to revisit.  Thanks to all who made the trip a success.  I hope I can return the favor at some point in the future.


Big news from the trip is that I have finally decided to back date, and have changed my modeling focus.


Time spent in Victoria has given me a much greater respect for the Victoria Railway, especially in it's pre-V-Line blue and yellow glory.  Time spent chasing 1950's era EMD products has taken it's toll.


The photo above shows the new focal point of my soon to be started railway.  Tocumwal was served until the 1980's by both the Victoria broad gauge and the New South Wales standard gauge rail systems.   The compact yard precinct had silos and stock pens served by both systems and also had facilities to transfer goods between wagons from each railway.


Also, how cool is a river lift bridge that used to be a combination Rail / Road set up complete with a gate keepers shack. 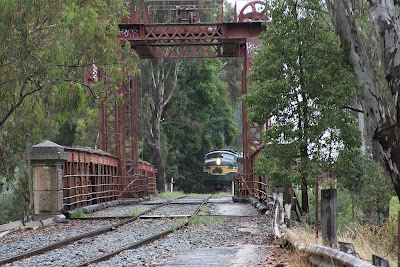 The announcement during our trip and subsequent purchase of the beautiful Bendigo Rail Models T-Class, set the design wheels in motion.  Between the T's and the "Soon to be released"  (maybe, hopefully) NSW 48-class Alcos, made Tocumwal seem like a perfect way to feed my interests.


In my next posts I will reveal my plan and outline my hopes for this new direction I've taken.    Anyone need  some modern era container and coal wagons!!
Posted by Lance at 03:04